Striving for Authenticity in Custom-Home Design

New homes are often hybrids of two or more architectural styles. With one-of-a-kind custom, it’s natural to expect a variety of stylistic influences. But sometimes design is informed by other forces, such as the vernacular of a particular area.

Shingle style, for example, was developed in New England and started out as a popular form of architecture in seaside towns. The home shown here, located on Martha’s Vineyard, Mass., has naturally weathered shingles, a gambrel roof, and a front porch with classical columns that make it immediately recognizable as a Shingle-style house, says architect Patrick Ahearn.

North Carolina has the third-largest inventory of modern homes in the U.S., many concentrated in the Research Triangle (Raleigh-Durham-Chapel Hill), and the Chapel Hill residence featured in this article takes its rightful place among them. “I see it as purely modern, not mid-century modern,” says architect Phil Szostak, who counts Richard Neutra and Rudolph Schindler among his many influences.

While striving for architectural authenticity, Ahearn and Szostak remained conscious of the needs of their clients and the overall livability of the home. 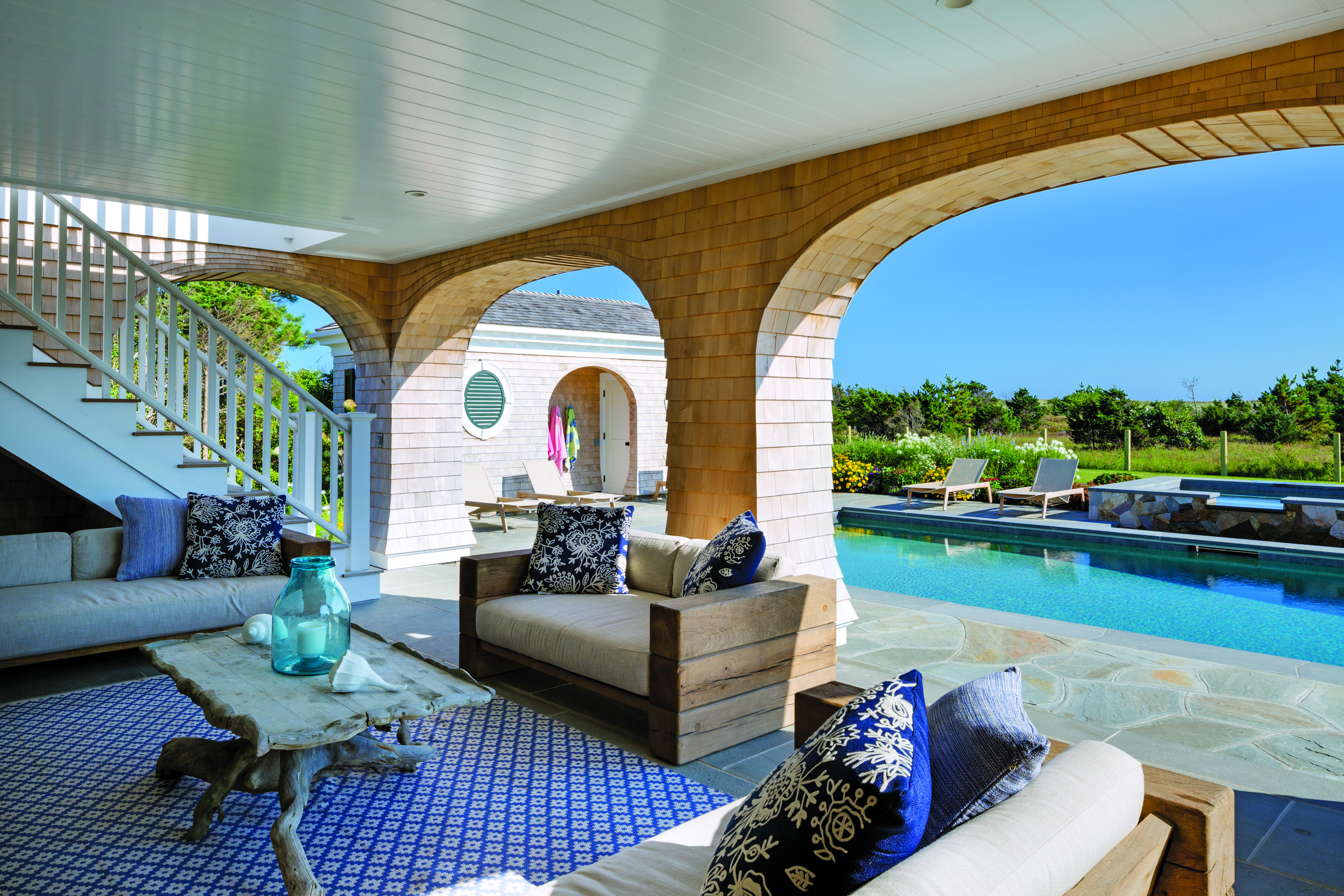 Shingled, arched columns enclose the covered porch, which has a "hidden" stairway for access to the second-floor deck. Even the cabana has Shingle-style elements (Photos: Greg Premru).

This Martha’s Vineyard home is one of five built on a beach that is popular for its active waves, scenic dunes, and lack of development. Ocean views are difficult to capture because of the rolling nature of the dunes and a 30-foot height limit imposed by the homeowners association (HOA), so the homes have “upside down” floor plans that maximize views from the primary living spaces. They’re similar in scale, but each is different in character.

The 5,500-square-foot vacation home shown here was designed by Patrick Ahearn, principal at Patrick Ahearn Architect, in Boston, and built by Rosbeck Builders, in Edgartown, Mass. It’s reminiscent of the clients’ country home in Vermont, but with Shingle-style beach house elements to fit the setting. 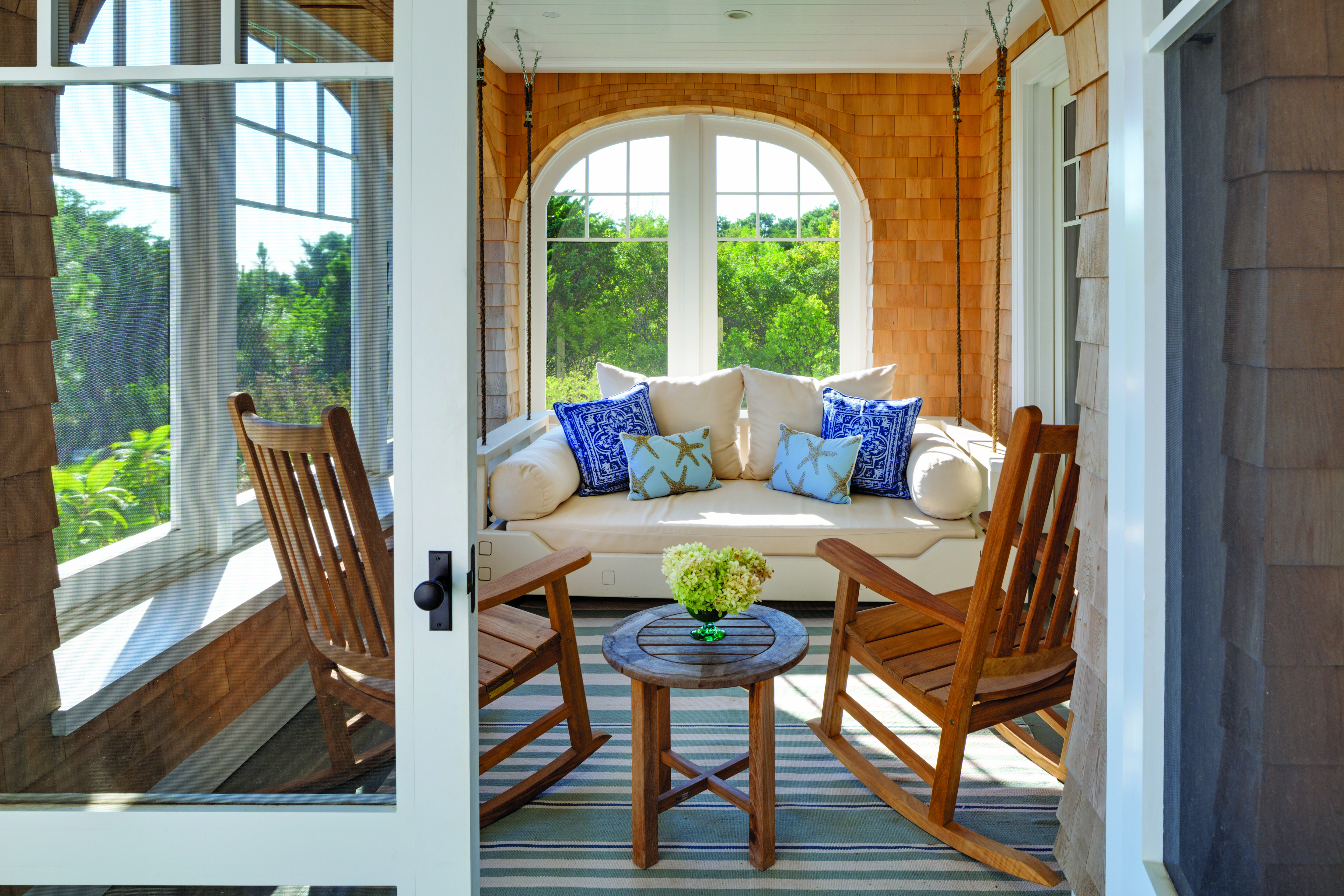 Though the covered porch is grander than a typical Shingle-style house, other elements (such as the screened porch) remain true to the genre, with great views and privacy.

“The homeowners association and the owners of the abutting property were concerned that their long view to the sunset in the west would be obscured, so we built the house in the exact same location as the existing house from the 1970s,” Ahearn explains. “In addition, we canted the house on an angle so that from the master suite, the clients can look out to the west at the ocean, yet cannot see the house next door while lying in bed.” Extensive landscaping screens the property from adjacent homes to the east and west. 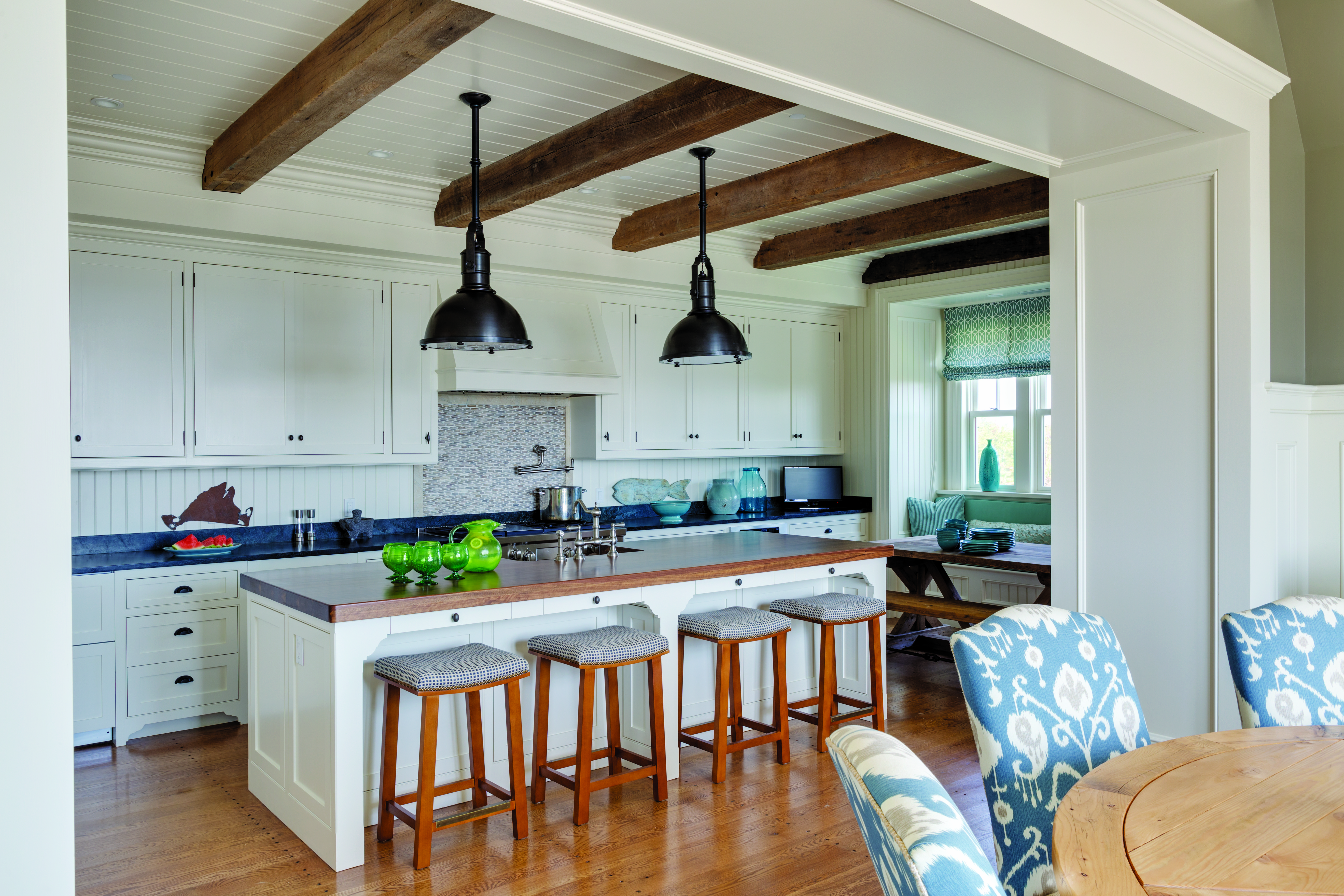 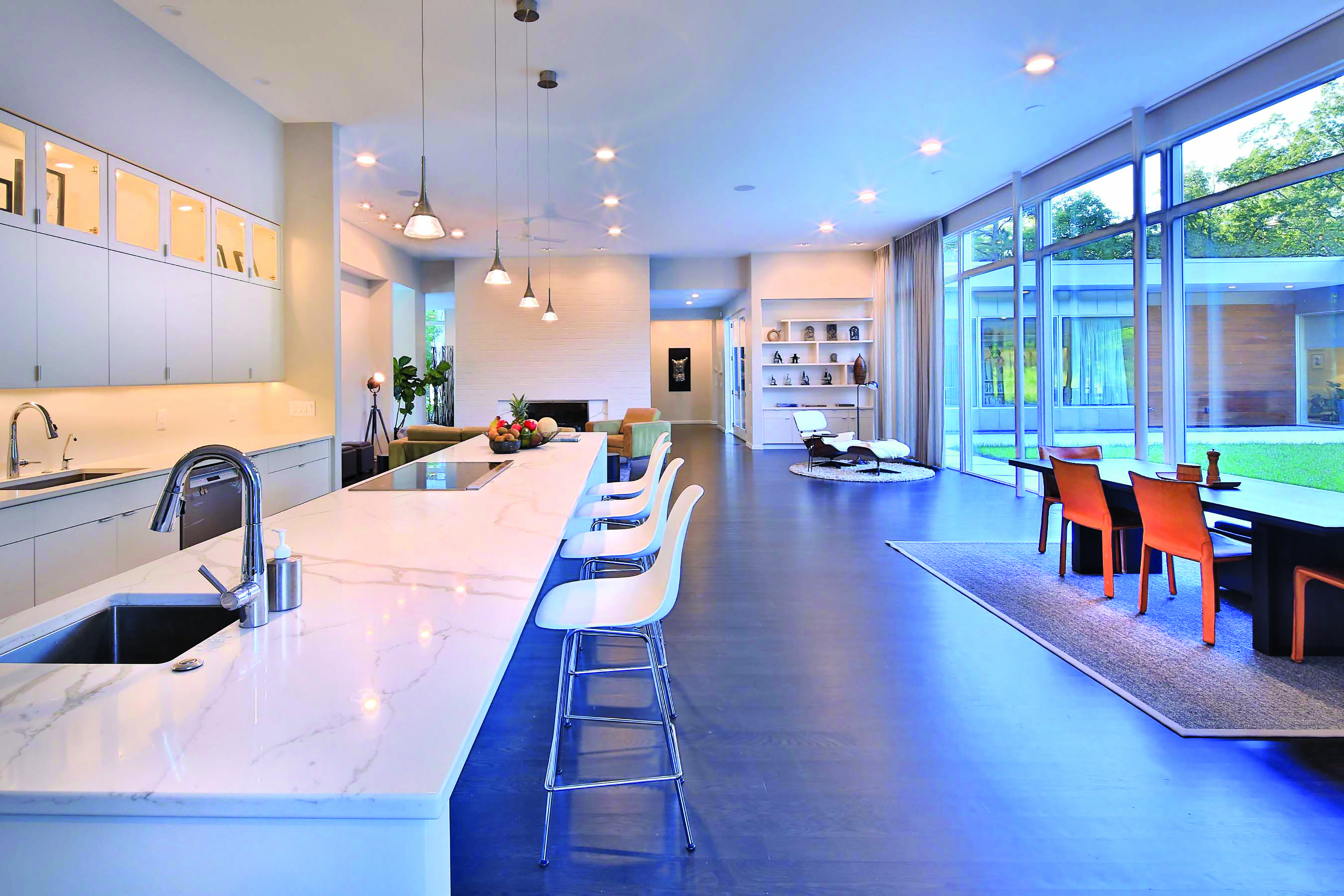 Direct access to the outdoors is another important element, says Chapel Hill, N.C., architect Phil Szostak. “Most of my houses are [on one level],” says Szostak, referencing William Wurster, a San Francisco architect “who was really the father of the ranch house.” Because of the hot, humid North Carolina summers, Szostak’s homes usually have white exteriors. “Even our brick homes are painted white to reflect the heat,” he says. “That’s something the early modernists have done as well, particularly in the desert.”

To make the house appear as though it was not up on stilts, Ahearn fully integrated and hid a stairway system from the second-floor primary entertaining deck to the first-floor pool level, creating an easy, flowing dialogue between the two spaces. The covered porch, which is really an outdoor living room overlooking the pool, is grander than what you would typically see in a Shingle-style house, he says.

To satisfy the clients’ desire for multiple entertaining spaces, the home includes a number of outdoor amenities including a substantial covered porch with an outdoor fireplace and an enclosed screened porch off the family room, both of which step down and out to the pool. On the pool level, the architect incorporated a cabana that houses pool equipment, a changing area, and a bathroom, and has its own fireplace and gathering area.

Because the family members are tall, Ahearn says, “We needed to create meaningful volume on the second floor without making the house appear top-heavy. We used gambrel shapes and installed floor joists in the foundation to help fully express the dimension of the interiors with high volume spaces around the primary living space.”

Casual, heavy timbers and chunky moldings evoke Vermont country-house style and balance the increase in scale. These details are blended with beadboard and other Shingle-style elements.

Reclaimed beams from Washington state were shipped to the construction site, where Rosbeck had them milled and fitted to the ceilings. The beams are extensively used throughout the house. “The beam work, in particular, really sets the home apart,” he says.Indoor-outdoor connections

This residence in Chapel Hill, N.C., follows a lineage of modernist archtects who studied, worked, and taught in the area. Walls of aluminum-clad windows suffuse the interiors with natural light, while deep roof overhangs help deflect the heat of the summer sun (Photos: Jim Sink Photography).

Modernist architecture in North Carolina’s Research Triangle dates back to the 1940s, says Chapel Hill architect Phil Szostak, a graduate of the NC State University College of Design. “Very influential architects either taught or studied there, and many stayed in the area and practiced,” Szostak says.

He designed and built this 4,500-square-foot residence for a couple with two daughters who had immigrated to the U.S. from India. One spouse teaches at Duke University and the other at the University of North Carolina. The 2 ½-acre site is located in a rural buffer across the street from a wooded area with trails.

“They came to us with the idea of building a modern house,” Szostak says. “Having lived in courtyard and walled housing in India, they were familiar with homes that provide easy access to outdoor space that’s usable any time of day.” 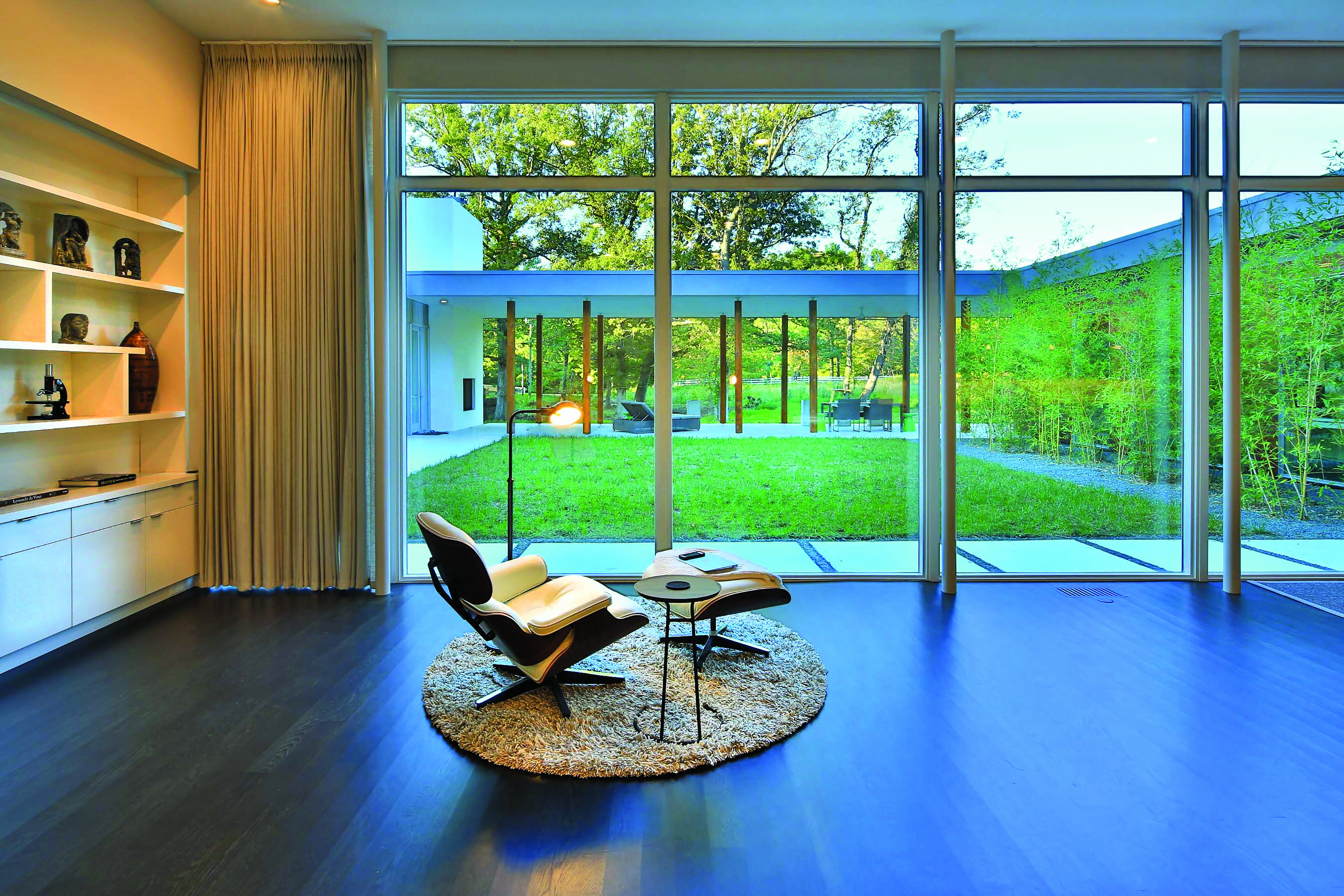 The modern vernacular, he says, is equally appropriate for North Carolina’s warm, humid climate, while design elements such as shaded patios, natural ventilation, and reflective coloring recall the traditional architecture of the South.

Szostak sited the home in a clearing on a wooded hillside and oriented it for protection from solar glare. The entrance hall passes straight through to the courtyard, providing cross ventilation through the central volume of the home. The living, dining, and kitchen areas are organized in an open plan, creating a large gathering space that extends directly into the courtyard and the covered patio beyond. A second patio is accessed through the kitchen and faces east to take advantage of cooler morning light.

The two wings flanking the courtyard are dedicated to the family’s bedrooms and work/study spaces on the west, and a guest suite, piano room, and art space on the east. The children’s grandmother, who lives with the family, occupies the guest suite. “The courtyard gives them the security they desire,” Szostak says. “They can spend time outside, but still feel protected.”
One spouse is a department head at Duke University, so the home has to work well for entertaining, but the clients prize family time above all else. Both daughters are musicians and artists. Other rooms are designed to flex for different purposes such as a guest room, an exercise room, or an office. 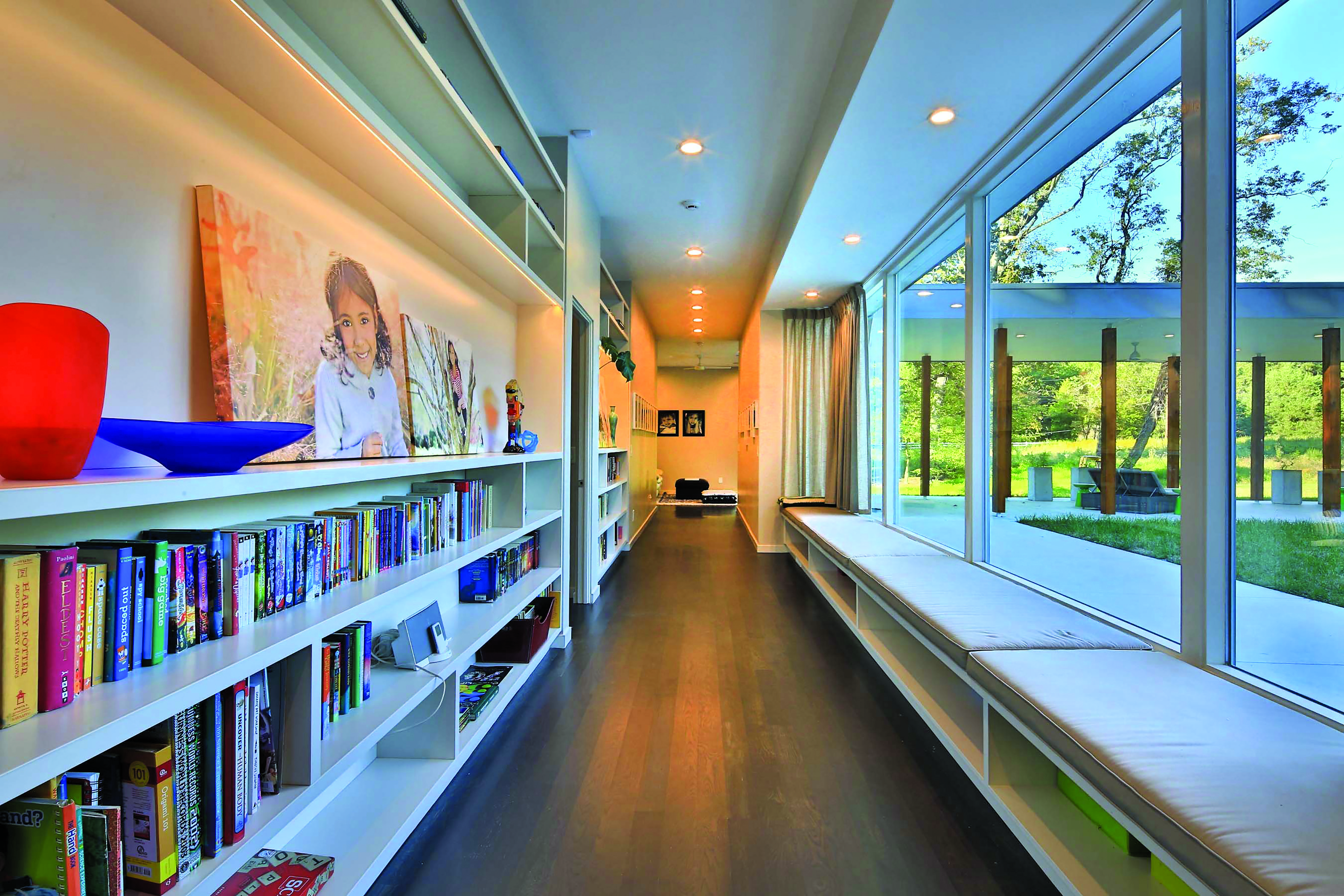 The kitchen, with its 17-foot-long island, is the place where the entire family gathers for cooking, eating, socializing, and studying. The couple also desired a luxurious master bath where they could unwind. Szostak obliged with an oversize shower and a floating dual vanity.

“One of the best things about this house is that it reflects the family,” he says. “Because the living room, dining room, and kitchen separate the two wings, it’s almost an old-fashioned, multi­generational home where [every­one] can have privacy and yet come together over food.”