Designer and builder Rob Wells is based in San Diego but spent his teen years in Squaw Valley, Calif., and wanted his kids to experience life in the Sierra Nevada. Building Gnar House there was also a chance to experiment. “Gnar,” short for gnarly, has several meanings, including extreme or great. For Wells, who works for clients under tightly defined conditions, it also meant “building a home that broke some rules.”

The home uses energy-saving techniques, and it features salvage objects with personal meaning. Stair rails are made of cable from a ski lift that Wells operated as a teen. A chair from the lift is suspended in the front entry. 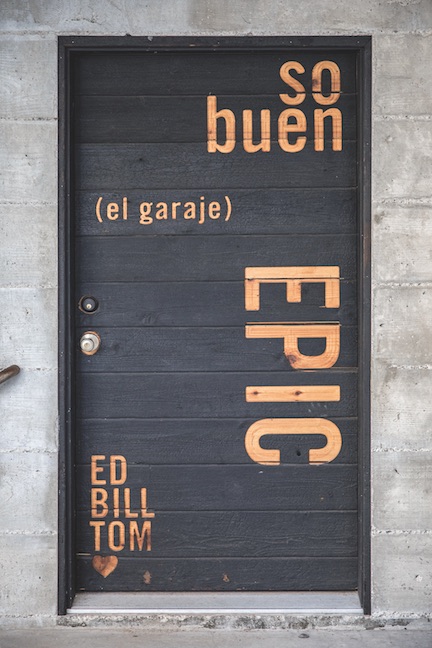 Shou sugi ban (scorched wood) was used on the front and rear elevations, on the front door, and on the side door of the detached garage (shown). The lettering was carved into the wood with a CNC machine. Photo: Jon Rouse/Rouse Photography

Wells also tried his hand at shou sugi ban, the traditional Japanese practice of scorching cedar to bring out its oils and make the wood resistant to rot, pests, fire, and water. He used shou sugi ban on the front and rear elevations of the house (below), on the front door, and on the side door of the detached garage (at left). That garage stores outdoor gear and will soon house a climbing wall for Wells’ daughters to practice rock climbing. The door bears the nicknames of the three girls (Eddie Olivia, Billie Elouise, and Tommie Lorraine); Spanglish for “so good”; and the word “epic” (“that one is self-explanatory,” Wells says). Wells’ wife, Amy, an artist and designer, typeset the design, sent the file to a computer numerical control (CNC) machine, and the charred door was brought to a local vendor to have the words carved through the burn layer. The tongue-and-groove red cedar panels were then taken apart for transport and reassembled on site.

The way Wells sees it, doors are often nondescript. Emblazoning them, he says, “was a way to let the house speak.” Q&A: Embracing the Creativity and Authenticity of Classic Architecture

Architect Andrew B. Cogar on tradition, teamwork, and sustainability in classical/historical architecture. Inspiration can come from a variety of sources, but the net result is always a better house, says guest columnist and BSB Design architect Ed Binkley A builder's new ideas for tackling sourcing, sustainability, and other industry challenges