One with nature: Stunning custom homes that make the most of their natural surroundings

Nature played a significant role in the design and construction of the two residences featured here. One is in the middle of a forest; the other is a rebuild of a home destroyed by wildfire. They offer lessons in sustainable harvesting, the creative use of materials, and making houses perform efficiently regardless of size.

More than two years in the making, Lakewood House is designed for big family reunions. It’s really a collection of buildings — a main house, guest house, boat house, and woodworking shop — on 90 acres of dense, old-growth forest in New England.
The lakeside home has a fan-shaped plan, devised by architect Mark Simon to take advantage of views, topography, and a southern exposure. Simon, a partner with Centerbrook Architects & Planners, Centerbrook, Conn., says the 8,000-square-foot home actually started out a lot bigger.

“It just wasn’t efficiently laid out, so the design process was one of very careful editing and reworking so that all the pieces were connected the way the clients needed them,” he says. “They have an extended family all over the world — on three continents — and this is the place where they wanted to get everybody together.” 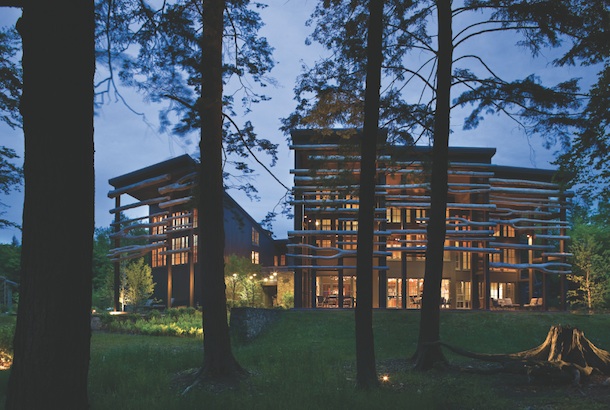 The Lakewood House in New England reveals its fan-shaped plan. The standing-seam metal roofs are peppered with curved, glazed transom windows and have deep overhangs that reduce heat gain from the summer sun. Photo: Peter Aaron/OTTO

Simon, the clients, and Cambridge, Mass., landscape architect Stephen Stimson walked the site beforehand to determine the optimum placement for southern light, which would help heat the house passively in the winter. “We could put the house there comfortably without getting into wetland setbacks,” says Simon.

The property had not been forested for at least 40 years, so the clients hired state forester Jim Gillespie, Burlington, Conn., to help them manage it sustainably. Gillespie noticed a large grove of wild cherry trees that had grown to their maximum size and were ready to start falling. “We ended up getting thousands of board feet from the cherry trees, which we then used for flooring, ceilings, and furniture,” says Simon.

A screened porch runs across the rear of the house. Shed roofs with long overhangs block the summer sun. For additional screening, Simon first thought of louvers, “but I started thinking that maybe there was a way to use round elements.” He realized that large logs would also break down the scale of the high walls.

Simon called in rustic artist Daniel Mack of Warwick, N.Y., who is an expert in harvesting trees, to help design this natural screen. Mack sourced the logs locally and had them peeled and delivered to the site.

In a field behind the house, builder Burlington Construction, Torrington, Conn., used a backhoe to move the logs around while Simon, Mack, and the clients climbed on a cherry picker and mapped out a pattern. They deliberately chose logs that differed in size and shape. The logs were then treated with boric acid, a preservative that isn’t harmful to the environment, and bolted horizontally to tall wood columns. 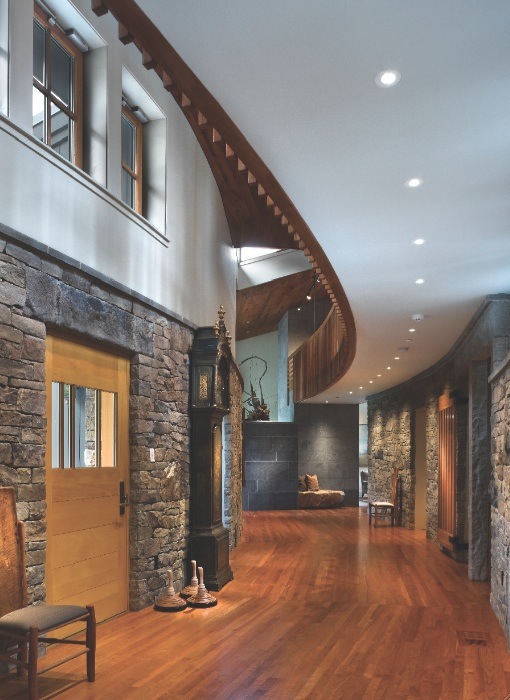 Oneglia says his biggest challenges were the construction of the foundations and under-slab drains in proximity to the lake, as well as the installation of geothermal beds and septic fields. All of this had to be done while preserving the integrity of the virgin environment.

In addition to custom woodwork throughout the house, stone was used on the walls and to accent the living room’s massive fireplace. Much of the stone was taken from the site, and it’s not just decorative; it absorbs heat during the day and releases it slowly at night, keeping the house warm without using fossil fuel.

Many systems and materials work together to keep utility bills manageable — no mean feat for such a large house. There are 12 inches of insulation in the roof, foam insulation in the walls, and energy-efficient, wood-framed windows. Multiple heat sources include a closed-loop geothermal system, radiant floor heating, and a masonry heater (also known as a Russian stove) that stores and slowly radiates heat into the rooms.

Risen from the ashes 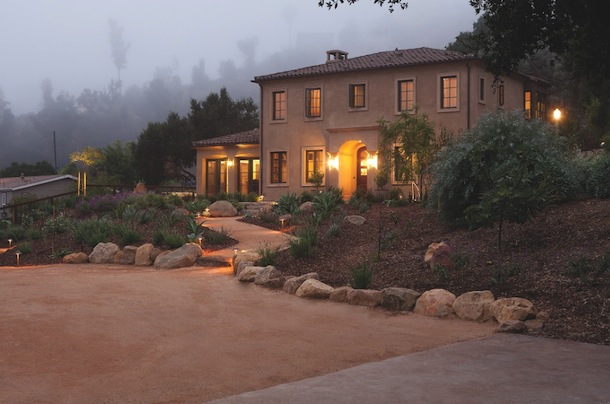 Built on the site of the clients’ former home, which was lost in a wildfire, this new Tuscan-style home affords ocean views from the second floor. The landscaping was designed to reduce fire hazard and requires little watering. Photo: Lauren DeBell Photography LLC

After a wildfire claimed their home in Santa Barbara, Calif., the owners decided to rebuild on the site. Their budget was limited to the amount of the insurance settlement, so the new home had to be as efficiently designed as possible, not to mention fire-resistant.

Before the fire, the clients had considered flipping the orientation of their rambling ranch 180 degrees so that the front door faced a creek and oak trees and the back door faced the ocean. When the ranch house burned down, an opportunity presented itself. The new home, a two-story Tuscan villa, is located on the highest point of the lot and takes advantage of canyon and mountain views. At 2,000 square feet, it’s about 500 square feet smaller than its predecessor.

The builder, Mark Hutter of Allen Associates, Santa Barbara, explains that immediately after the fire, friends of the family invited them to stay at their Tuscan-style home. “It had all these rustic finishes — old wood, old beams, and salvaged doors — and the family really liked it,” says Hutter. 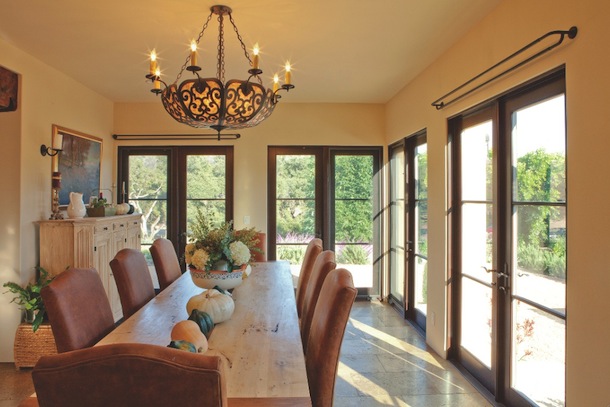 The wife, a professional chef, didn’t want a “trophy kitchen,” says the builder. This one has large work spaces, a commercial range, and drawers instead of lower cabinets, plus a wood-fired pizza oven in the adjacent dining room. Photo: Lauren DeBell Photography LLC

Architects Akiko Wade and Jim Davis, of Wade Davis Design in Santa Barbara, note that the massing of vernacular Tuscan buildings is elegant yet very cost-effective. They also kept costs down by adding stucco window moldings, which give a feeling of depth to the windows without having to double frame and dress up the building’s relatively simple form.

The master suite and two additional bedrooms are on the second floor. “The roof deck off the master bedroom was an expense that we tried to get the clients to eliminate, but they wouldn’t budge on it,” says Hutter.

The project’s success is due, in large part, to the clients’ involvement, Hutter says. “From the very beginning, the family was going around as a unit,” he says. “Even when it wasn’t necessary for the kids to be there, they got to observe the process. We went through a few design iterations and gave them constant pricing feedback to make sure we were within their budget.” Build a Business, Build a Brand

A craftsman's use of social media puts him on the map